Happy Birrthday Yarnia!  To celebrate our 5th birthday, we have a sale for you!  Check out all the yarns in the "Birthday Sale 2022" section under "Shop", and enter "YARNIAIS5" during checkout for 30% off!

My oldest daughter is my only kiddo who can moderately competently knit (that’s her hands knitting on our home page on the “classes” top banner!). Plus I had knit sweaters for her two younger sisters. That made her the perfect candidate for a new winter sweater (it’s always other knitters who appreciate our hand-knits the most!). Two years ago, when we were on a trip to see her new college, we stopped in a local yarn store in Iowa where she goes to school. I was so surprised—she’s usually a rustic, natural fiber type of girl, but she really liked Cascade Luminosa! That’s a synthetic core with black blown alpaca—definitely not crunchy & rustic!

At just that time, Luminosa was the cover-model sweater for Vogue Knitting. She loved the slouchy cozy look of that sweater, so it was an easy pick. Knit on size US 11 needles holding 3 strands of worsted-weight yarn triple, I knit it up in just a couple of weeks.

Annndddd…it didn’t turn out the way I’d hoped. That much Luminosa was incredibly heavy in a deep-raglan sweater, and it was just way oversized. I think mine is still the only finished project on Ravelry. It looked so cool up close on the cover of Vogue, but once you got it on, it was just way too big. This is a photo of daughter #3 modelling it (my oldest had gone to college by the time I finished knitting it)—she looks somewhat bird-like with those extremely deep raglans and heavy fabric! 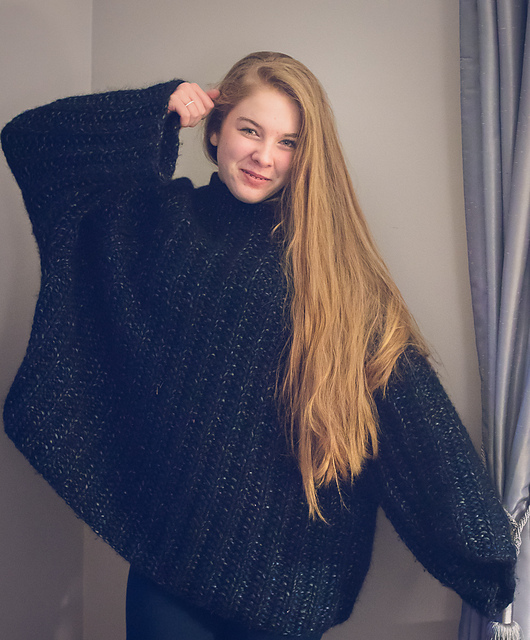 But a promise is a promise, and off that sweater went to Iowa. My oldest wore it for 2 winters, including the “polar vortex” winter with temperatures well below -20*F. If thick alpaca sweaters do one thing, it’s retain heat! It’s perfect for those frigidly-cold days. But not so practical to wear on a regular basis.

So, when she came home this summer, I told her to bring her sweater. We took one afternoon and I un-picked all the seams, then she unravelled the whole thing and put it into balls again. We looked through Ravelry and found a new sweater that has a much slimmer profile, and calls for the same gauge. So now those balls of yarn are going to become The Weekend Pullover by Diane Soucy.  Stay tuned for pix of the finished object, and this just goes to show--if you're unhappy with a finished object but love the yarn, unravel it!  It's worth it!

(For what it's worth, the original sweater may work in a lighter yarn.  For example, Alpaca Silver by Katia is the same gauge but half as heavy.  Or two strands of Stargazer Brushed by Juniper Moon.  Luminosa was an early-ish "tube with blown fiber" yarn and they've evolved a lot over the years.  Today we have options that are much less bulky!)